Manning Impex Ltd Ranked 10th out of 100 companies in the Surrey, Sussex and Kent region with an outstanding reported profit growth CAGR (over 2 years)

On Wednesday 10th July 2019, BDO LLP released their Profit Growth Report which revealed the fastest growing businesses in Surrey, Sussex and Kent that contributed in excess 0f £3.7bn worth of sales and more than 18,000 jobs to the UK economy last year. 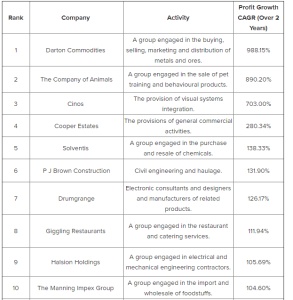 Profits at the Top 100 companies, grew by a staggering 76% on average each year over the last three years, bringing total profits to £623m.

These ambitious, high performing companies represent the rich diversity of business in Surrey, Sussex and Kent; from well-established family-owned companies in traditional industry sectors, such as retail, manufacturing and construction, to market disruptors in creative media technologies.

Across the region, the geographical distribution of the top businesses is fairly even with 35 in Sussex, 33 in Surrey and 32 in Kent.

Growth in profits is also similar in Kent and Surrey where companies achieved a 119% and 116% rise over the last twelve months compared to 73% in Sussex.

Managing Director, Andre Cheong said “This is an amazing achievement for the Company, not only does it showcase our hard work and dedication but it also highlights the tremendous effort that the staff and teams have played over the past years. As well as the dedicated customer service levels we offer to our customers.”

Stay up to date on our product releases, general news and special promotions.

Join us and explore the Brand Leaders from more than 45 sole agency companies.

Manning Impex Ltd is proud to support the British Red Cross Disaster fund, Save the Children and Oxfam. Through the combined generosity of Manning Impex Ltd and Business Partner Customers we supported charitable actions for Typhoon Vamco (Typhoon Ulysses) in the Philippines during December 2020. Manning Impex Ltd will continue to aid the vulnerable as part of its Social Improvement Programme.